276 Nigerian teenage girls were kidnapped on April 14th in the town of Chibok, by an Islamist extremist group called, the Boko Haram. The english translation for Boko Haram is, “Western education is sinful.” The Nigerian government is being criticized for failing to promptly take action to find the girls. They have been missing for two weeks now, and this week, hundreds of Nigerian women took to the Lagos streets to protest and call for action to find the missing girls. A Twitter campaign has also started, #BringBackOurGirls. 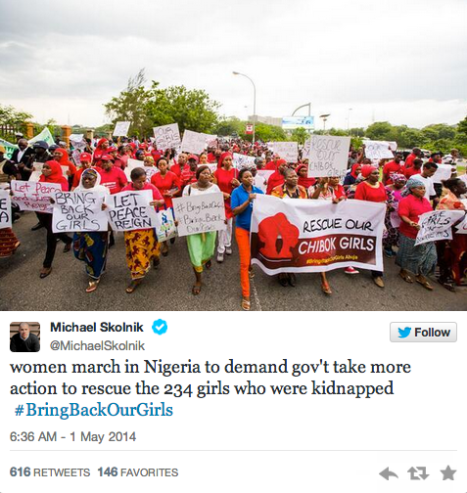 Many fear that the girls will be sold for about $12 and forced into sex slave, or to marry their captors, after reports surfaced this week. The Nigerian government is seeking the cooperation of other countries, and the United Nations security council in the rescue effort.

So far 53 girls have managed to escape.