I recently read a book called Catch and Kill by Ronan Farrow who is a lawyer and investigative journalist and the son of Hollywood actress Mia Farrow and director Woody Allen. Farrow was inspired to write this book because he grew up in the entertainment industry and he is a big advocate for supporting abused women or as they call themselves “survivors”. To Catch and Kill exposes the predatory history of the film producer, Harvey Weinstein and the various women that came forward with allegations against Weinstein.

Catch and Kill is a riveting account exposing that stories of abuse by powerful people are stories of the failure of board culture. Through Farrow’s investigation he details how Weinstein was able to buy off many people at the top and how most of the executives in the entertainment industry were complicit and provided a shelter for Weinstein’s questionable behaviour. Farrow explores how the media outlets pursue stories and interviews of these women only to compensate them for the rights to their story and then “kill” the stories to ensure that the victims have no voice. Farrow risked his journalistic career in exposing Weinstein, however his bravery to do so has paved the way for victims to have a voice and this gave effect to the Me-Too movement.

I was watching the latest episode of Super Soul Sunday this evening and Dr. Phil was the guest on this week’s episode.

When Oprah asked him what the key to having a successful, contented life is, his response was the following, “it breaks my heart to see people live, what I call an assigned life.”

Unfortunately, not everyone has the luxury of pursuing what they really want to do in life…

It is possible to find happiness in a life that you might not have desired when you were growing up, and I don’t think that people should be made to feel guilty for not necessarily following their dreams or living a life that their parents or society has chosen for them.

“There is only one race, the human race.” – Robert Sobukwe, Freedom Fighter

I am appalled at what has transpired in the United States this Summer. However, when looking at race relations and racism one has to explore the world and not just the United States. African people have had to fight the longest hurdle when it comes to racism. It is 2016 and they are still fighting the plight that Martin Luther King and Nelson Mandela amongst others have struggled and sacrificed for.

The events that have occurred has troubled and disturbed me. It is time that the world does not just mourn for a week. There needs to be a bigger impact than a mere hashtag! World leaders and activists need to start a greater debate about racism. I believe that this discussion needs to begin at the school level. Children are not born to discriminate based on race, it is taught at home and rooted in an unjustness that needs to end.

How is it acceptable that a black mother in the United States has to teach her black son to be fearful of the police and to be submissive to their orders for fear of being a victim of police brutality.

I grew up in a country that has had to overcome their own struggles with racism and 22 years after democracy is it still a daily battle. South Africa is situated at the southern most tip of Africa. It is a vibrant country with a rich past, however much of its history has been discolored, due to the volatility that existed during the apartheid era. Apartheid was a terrible time and was filled with discrimination and hate towards non-white people. We need to be stronger and not turn to divisive measures that hinder democracy.

Perhaps America needs to adopt a similar peace making process to achieve closure known as the Truth and Reconciliation Commission. There have been countries in the world to use this process such as, South Africa and Canada. This may quell the feelings of discontent amongst many black American youth and encourage them to have a transparent and seamless discussion about racism, discrimination, and marginalization.

Giffin’s debut best-selling novel, Something Borrowed was turned into a Hollywood movie.

She emphasizes that as we embark upon our trajectory in life, we may walk down many paths and whilst some may not be permanent, one should never let go of their dreams.

Which of your characters do you identify with the most?
“None of my stories are autobiographical, but I have something in common with each of the protagonists. After I finished this book [The One and Only], a few of my closest friends read it, and several of them remarked that Shea seemed more like me than my other characters, which surprised me, because on paper we’re not much alike. However the more I thought about it, the more I could really understand what they were saying. Shea’s voice really flowed for me, and I felt a connection to her, that went something beyond just our mutual love of sports.”

How did you become involved in the sport culture?
“Well, the backdrop for The One and Only is a very colourful one, and it may be different for women’s fiction, but it’s very much about relationships, just like my other books. I have always been passionate about college sports since I was young, and it was a large part of my college experience. I was the basketball manager of the men’s team, and the team really became like a family away from home to me. It goes beyond the game for me.”

What is the main message that you would like your readers to take away from The One and Only?
“I would say that the one thing that I do with all of my books, and in my writing is hope that readers find empathy from my characters. I create characters that I feel are realistic, and put them in situations, and force them to make unsympathetic choices. The theme in this book is to follow your heart, and be true to your authentic self, and to take risks. There are different themes that emerge, but I wouldn’t say that I’m hoping the reader internalizes a certain lesson.” 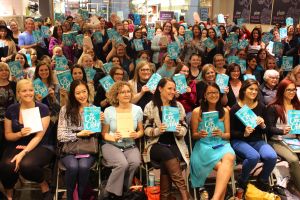 You changed your career from a lawyer to a successful writer. What advice would your give to someone who is trying to pursue his or her dream, but also at the same time wants a safe career?
“It’s such an individual decision. However I don’t think that there’s anything wrong with pursuing a career that feels safe. I think that no matter what path you choose, it’s not a permanent one. I don’t feel regret for having gone to law school, or practicing law. I would say that you could be practical without letting go of your dreams.” 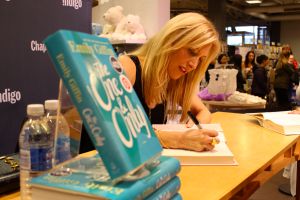 There has been buzz around Something Blue being turned into a movie. Is this happening soon?
“It is definitely happening. The cast is on board, and I’m writing the script. I’m extremely excited about the project!”

Are you a hopeless romantic?
“I believe in love, and I’m optimistic. I’m more of a realist, and I think that at times we have unrealistic notions about love and relationships. We expect it to be this fairytale that unfolds perfectly, and I think that’s why there’s so much pressure on engagements and weddings to be perfect. When people in relationships make mistakes, there’s sometimes a tendency to say lets just give up and this isn’t what I thought it was. I believe in redemption, second chances, and forgiveness.”

The Living Library is an inclusive and welcoming program at the Calgary Public Library. People can check out “books”, and the books are library volunteers, that share their diverse, compelling, and inspirational stories.

For more information on how to volunteer to be a Living Library book, email livinglibrary@calgarypubliclibrary.com

276 Nigerian teenage girls were kidnapped on April 14th in the town of Chibok, by an Islamist extremist group called, the Boko Haram. The english translation for Boko Haram is, “Western education is sinful.” The Nigerian government is being criticized for failing to promptly take action to find the girls. They have been missing for two weeks now, and this week, hundreds of Nigerian women took to the Lagos streets to protest and call for action to find the missing girls. A Twitter campaign has also started, #BringBackOurGirls.

Many fear that the girls will be sold for about $12 and forced into sex slave, or to marry their captors, after reports surfaced this week. The Nigerian government is seeking the cooperation of other countries, and the United Nations security council in the rescue effort.

So far 53 girls have managed to escape.

The worst mass murder in Calgary’s history took place in the early hours of Tuesday morning. Police were called to the residential neighbourhood of Brentwood around 1:30am, where five people were found with stab wounds, three dead at the scene.

The 5 victims, all in their twenties (4 males, and one female) have not yet been identified, however they were University students, celebrating the University of Calgary’s annual end of the school year party, Bermuda Shorts Day (BSD).

The suspect has been identified as 23 year old Matthew de Grood, the son of an inspector with the Calgary Police Services, Doug de Grood. According to Calgary Chief of Police, Rick Hanson, “the suspect arrived at the party, obtained a large knife and targeted the victims one by one, stabbing them.”

de Grood is charged with five counts of first-degree murder, and is in custody.

The police have not released a motive for the stabbings.

Hate Crimes Awareness Day was hosted in collaboration with the Alberta Hate Crimes Committee on April 9, 2014 at the Calgary Public Library.

According to the Alberta Hate Crimes Committee, hate crime is defined as “any criminal offence committed against a person or property, which is motivated in whole or in part by the suspects’ hate, prejudice, or bias against an individual or identifiable group based on real or perceived race, national or ethnic origin, language, colour, religion, sex, age, mental or physical disability, sexual orientation, or any other similar factor.”

As Calgary continues to grow in diversity we need to dispel the myth, prejudice, and preconceived ideas driven by racism and discrimination about individuals and/or groups of individuals and proactively advocate for a hate free Calgary, so that all Calgarians are respected.

A wise man once said, “No one is born hating another person because of the colour of his skin, or his background, or his religion. People must learn to hate, and if they can learn to hate, they can be taught to love, for love comes more naturally to the human heart than its opposite.” – Nelson Rolihlahla Mandela