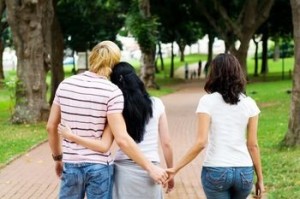 So, I was having a heart to heart with one of my closest friends a few evenings ago… She has recently ended a bad relationship, and during our 90 minute dinner (cosmopolitan in hand), I listened to her recall the final days of their tenuous relationship.

As I sipped on my pink bliss, I couldn’t help but feel a sigh of relief that I wasn’t in her shoes. Some of her details were enough to leave you second guessing committing to any guy (no matter how tall, dark, and handsome they might be dahling).

As my friend recounted her sad story, she would stop every so often to heed a warning, “just be careful, all guys say they won’t cheat, but end up doing just that anyway.” Of course I would just nod my head and murmur “yeah,” she was tainted by her apathetic ex after all.

We eventually parted ways, and as I hugged my friend goodbye, I uttered the reassuring words that every girl says to comfort her heartbroken friend,“it’s his loss.. You were too good for him anyway.”

That night as I was falling asleep, I hoped that I would never have to sit on my friend’s side of the table, recounting my misery to a friend, as they dutifully nodded and gasped at the appropriate times.

I have always thought that there were better things to do with my time, than to fight over a man!

I couldn’t fathom how my intelligent friend let herself spiral into such turmoil… I mean why don’t all women just walk away after that first sinking feeling (easier said than done, yes). Perhaps, they don’t walk, because that one hopeless feeling isn’t worth destroying, what many women think is their one shot at everlasting love. Perhaps.

I truly respect all the Hilarys, Humas, and Elizabeths of this world!

The Marilyns, Monicas, and Rielles will have their day…