Giffin’s debut best-selling novel, Something Borrowed was turned into a Hollywood movie.

She emphasizes that as we embark upon our trajectory in life, we may walk down many paths and whilst some may not be permanent, one should never let go of their dreams.

Which of your characters do you identify with the most?
“None of my stories are autobiographical, but I have something in common with each of the protagonists. After I finished this book [The One and Only], a few of my closest friends read it, and several of them remarked that Shea seemed more like me than my other characters, which surprised me, because on paper we’re not much alike. However the more I thought about it, the more I could really understand what they were saying. Shea’s voice really flowed for me, and I felt a connection to her, that went something beyond just our mutual love of sports.”

How did you become involved in the sport culture?
“Well, the backdrop for The One and Only is a very colourful one, and it may be different for women’s fiction, but it’s very much about relationships, just like my other books. I have always been passionate about college sports since I was young, and it was a large part of my college experience. I was the basketball manager of the men’s team, and the team really became like a family away from home to me. It goes beyond the game for me.”

What is the main message that you would like your readers to take away from The One and Only?
“I would say that the one thing that I do with all of my books, and in my writing is hope that readers find empathy from my characters. I create characters that I feel are realistic, and put them in situations, and force them to make unsympathetic choices. The theme in this book is to follow your heart, and be true to your authentic self, and to take risks. There are different themes that emerge, but I wouldn’t say that I’m hoping the reader internalizes a certain lesson.”

You changed your career from a lawyer to a successful writer. What advice would your give to someone who is trying to pursue his or her dream, but also at the same time wants a safe career?
“It’s such an individual decision. However I don’t think that there’s anything wrong with pursuing a career that feels safe. I think that no matter what path you choose, it’s not a permanent one. I don’t feel regret for having gone to law school, or practicing law. I would say that you could be practical without letting go of your dreams.” 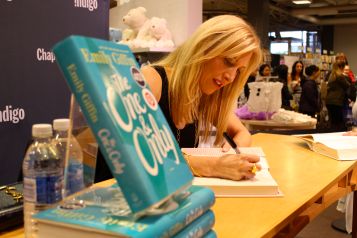 There has been buzz around Something Blue being turned into a movie. Is this happening soon?
“It is definitely happening. The cast is on board, and I’m writing the script. I’m extremely excited about the project!”

Are you a hopeless romantic?
“I believe in love, and I’m optimistic. I’m more of a realist, and I think that at times we have unrealistic notions about love and relationships. We expect it to be this fairytale that unfolds perfectly, and I think that’s why there’s so much pressure on engagements and weddings to be perfect. When people in relationships make mistakes, there’s sometimes a tendency to say lets just give up and this isn’t what I thought it was. I believe in redemption, second chances, and forgiveness.”

Holt Renfew Calgary, recently hosted a personal appearance by fashion designer, Rebecca Minkoff. The event featured Minkoff’s Spring/Summer 2014 Collection. Fans were able to browse the trunk show, interact with Minkoff, and get their ‘Rebecca Minkoff’ handbag autographed. I had the opportunity to interview Rebecca about her colourful collection.

Mindy Kaling, also known as Vera Mindy Chokalingam is a famous comedian/writer/actress. Kaling rose to fame during her role on The Office, where she played Kelly Kapoor for eight seasons.

In 2012, Fox gave Kaling her own sitcom, titled The Mindy Project. On the half-hour comedy, Kaling plays a 30-something-year-old, OB/GYN (no surprise there), living in New York City. The premise of the show features the various licentious love exploits and mishaps that Kaling’s character faces. Since the inception of The Mindy Project, Kaling has taken quite a bit of heat for not embracing diversity and featuring more people of colour on her show, especially as love interests. If one watches all episodes of the show, every one of Kaling’s love interests have been Caucasian.

Now, I have never really been a huge Mindy Kaling fan however, I will admit that she is extremely talented at her craft. When The Mindy Project was announced, I was rather thrilled that “Hollywood” was finally embracing an Indian woman, by giving Kaling her OWN show! Being a young woman of colour myself, I was excited to see what Kaling would add to the TV world in terms of diversity and how she would represent Indian people who are an extremely marginalized group on western TV.  After watching all episodes that have aired, diversity is something that one would find hard to associate with The Mindy Project.

On March 11th, 2014 Kaling attended a panel at SXSW, and was posed a question about the lack of diversity on her show, to which Kaling proudly responded, “I’m a f*cking Indian woman who has her own f*cking network television show, okay?” Surely she could have put it more eloquently…

As someone who is a minority, and that has been given the privilege of having a voice in a rather one-coloured industry, I don’t think that is a good enough response, Ms Kaling. Should she not be using that scope to promote multiculturalism, and change how people of colour are perceived in Hollywood.  However, maybe we all need to give Kaling the benefit of the doubt. It’s tough to hold onto your own show in today’s fast-paced television industry, where all the networks only seem to care about ratings over quality/content. Would a TV show with more ethnic diversity really have made it past season 1? Kaling is just playing it safe. At the end of the day, she needs to keep her job, and it seems the only way to do that is to mimic the casting of all the other shows on TV, but don’t forget to cast that one stereotypical person of colour (usually African American)… just for laughs.

*UPDATE* Perhaps due to media pressure/speculation surrounding Kaling’s lack of multicultural representation on her show she featured a non-white love interest and addressed her Indian heritage towards the end of Season 4.